Link to this page

Promenade 1913
Order a Hand-Painted Reproduction of this Painting 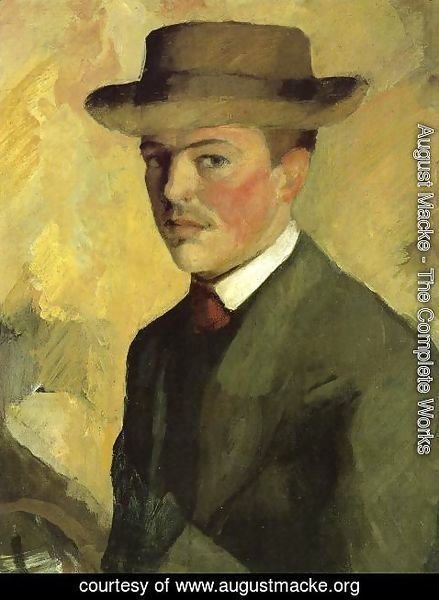 August Macke was born in Meschede, Germany. His father, August Friedrich Hermann Macke (1845-1904), was a building contractor and his mother, Maria Florentine, née Adolph, (1848-1922), came from a farming family in Germany's Sauerland region. The family lived at Brüsseler Straße until August was 13. He then lived most of his creative life in Bonn, with the exception of a few periods spent at Lake Thun in Switzerland and various trips to Paris, Italy, Holland and Tunisia. In Paris, where he traveled for the first time in 1907, Macke saw the work of the Impressionists, and shortly after he went to Berlin and spent a few months in Lovis Corinth's studio.

His style was formed within the mode of French Impressionism and Post-impressionism and later went through a Fauve period. In 1909 he married Elizabeth Gerhardt. In 1910, through his friendship with Franz Marc, Macke met Kandinsky and for a while shared the non-objective aesthetic and the mystical and symbolic interests of Der Blaue Reiter.

Macke's meeting with Robert Delaunay in Paris in 1912 was to be a sort of revelation for him. Delaunay's chromatic Cubism, which Apollinaire had called Orphism, influenced Macke's art from that point onwards. His Shops Windows can be considered a personal interpretation of Delaunay's Windows, combined with the simultaneity of images found in Italian Futurism.

The exotic atmosphere of Tunisia, where Macke traveled in 1914 with Paul Klee and Louis Moilliet was fundamental for the creation of the luminist approach of his final period, during which he produced a series of works now considered masterpieces. August Macke's oeuvre can be considered as Expressionism, (the movement that flourished in Germany between 1905 and 1925) and also his work was part of Fauvism. The paintings concentrate primarily on expressing emotion, his style of work represents feelings and moods rather than reproducing objective reality, usually distorting colour and form.

Macke's career was cut short by his early death at the front in Champagne in September 1914, the second month of World War I. His final painting, Farewell, depicts the mood of gloom that settled after the outbreak of war. (From wikipedia)

Report an error on this page